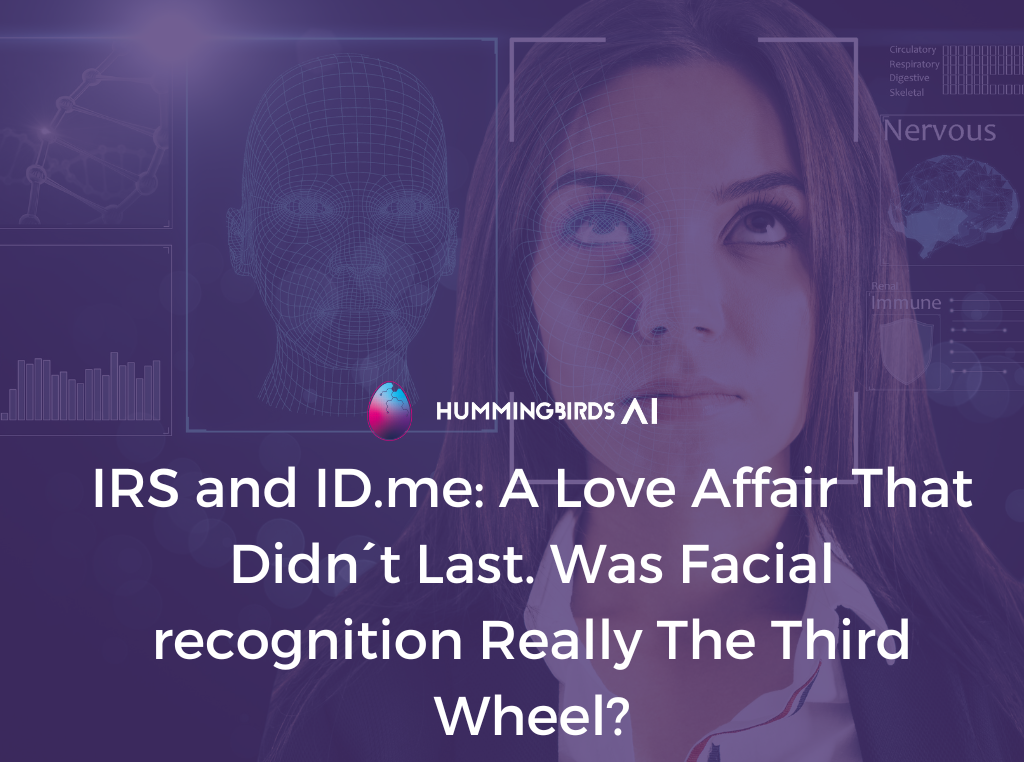 IRS and ID.me: A Love Affair That Didn’t Last. Was Facial Recognition Really The Third Wheel?

Face recognition platforms are quickly becoming a mainstream component of people’s everyday lives. From unlocking our mobile devices to tagging our friends in Facebook posts, this type of biometric technology makes authentication quick, simple, and efficient. Recently the IRS signed a contract with identity authentication company ID.me to make it its face recognition provider and handle every single access to IRS. But the contract didn’t last long at all. Shortly, opposition voices rose with one simple concern coming both from users and lawmakers alike: what about our privacy? This small big word is present in everyone’s mind although sometimes companies and governments forget about it. And because with great power comes great responsibility, the big question here is: Is face recognition the big monster or is it possible to create a face recognition tool that implies privacy itself?

Apart from being efficient, self-managed, and highly scalable, face recognition simply makes lives easier. Instead of having to remember lengthy, complex passwords, users can now use facial recognition features to confirm they are who they say they are. But is it really making lives easier?

The U.S. Internal Revenue Service announced a couple of weeks ago that citizens would be required to record a video of their face with their own computer or smartphone, and send it to the private contractor ID.me to confirm their identity. This procedure needed to be done by anyone wanting to access their records — including details about child tax credits, payment plans, or tax transcripts. This decision aimed at cutting down on identity theft, a crime that affects millions of Americans. The IRS has previously reported a number of tax filings from people claiming to be others, and fraud in many of the programs that were administered as part of the American Relief Plan has been a major concern to the government.

But these announcements using ID.me as a verification image-based system draw criticism among civil liberties advocates and ordinary taxpayers. The main concerns had to do with the fact that the system could not only provide valuable personal information to hackers but also showed accuracy problems for people with darker skin tones and even obstacles to connect with an agent by video in those cases where there was a lack of high-speed internet access.

This ID.me issue ended up with the IRS announcing it will stop using it as lawmakers and privacy experts expressed opposition to the plan together with four congressmen who also asked the IRS Commissioner to pause its use. But is it really a matter of the technology used? Is face recognition technology the real problem here or just ID.me?

Facial recognition is a biometric technology capable of uniquely identifying or verifying a person by comparing and analyzing patterns based on the person’s facial contours. This third-party facial recognition technology is widely used in diverse industries around the world successfully.

But as it usually happens with technology, you can find some fervent supporters but also detractors voicing its disadvantages. There are many concerns around face recognition technology, such as invasion of privacy or abuse of power but also many pros about its users such as security and safety. This technology is already a heated debate so let’s analyze the pros and cons of it.

Among the pros of this technology Security issues are at the top of this list but let’s just take a deeper look:

When talking about the Cons, Face recognition technologies have been criticized for its accuracy, privacy issues and misuse of private data:

When talking about accuracy, ID.me has also been questioned about its verification process as it uses a selfie to check people’s identities. As the ID.me founder expressed, “ID.me does not use much facial recognition, which is more complex and problematic”.

Even though for a great number of people face recognition authentication processes seem taken from a movie, it is currently being used in many ways in diverse industries across the globe.

The use of third-party facial recognition technologies is becoming more and more prevalent and is for sure transforming the landscape in terms of efficiency, security, and safety. What happened with ID.me is not a problem with this technology itself. Facial matching has great advantages and just like any breakthrough or new technological advancement, it needs to be constantly revised, updated, and improved. ID.me´s use of this technology is not the problem. They use it and apply it to a variety of public services successfully. But if ID.me is to be blamed for something it is not for the technology but for the fact that they forgot, in the specific case of the IRS, to put customers and their needs at the center of their technology. For customers, privacy and data-sharing were a concern, bigger than ID.me and IRS expected. And so they failed.

Technology can make our lives easier but it must be used correctly. On one hand, it brings great advantages to companies and end-users helping them enhance their security and performance. On the other hand, it may be misused for personal benefit leading to serious consequences. Facial recognition is a useful and powerful tool and has become paramount when talking about the need for fast and contactless access and authentication systems to prevent data breaches and fraud incidents. It is our job as inventors to keep working on more user-friendly, privacy-first, transparent, and secure procedures.