Typically, surveillance systems that rely on multiple cameras have a need for human supervision to  identify potential threats, which generally implies that those in charge of surveillance have to be on  the lookout for the site continuously or that, by monitoring at certain times only, it is not possible to  have the information of the people who are in the place at times when it is not being monitored  unless the recording capacity is available, which implies the storage of large amounts of information  in videos.

The objective of incorporating computational vision in surveillance systems aims to address two problems, detection and recognition of people. Depending on the way the camera is installed in the place of interest, the operation of the required surveillance system will have subtle differences, for example with the exterior, interior, or crowded lighting.

Initially, for this demo, the way of performing detection and identification of people is mainly  supported in the detection and recognition of faces instead of the full body for several reasons:

-It is easier to have access to public domain datasets for facial recognition.

-The methods to perform facial recognition are well documented and there exist dozens of libraries and useful tools that facilitate the development of an express proof of concept (as it was required for this development).

-The development of this proof of concept relies on several open-source libraries with permission to use for commercial use, modification, and distribution, such as FaceNet-PyTorch,  open-cv, sci-kit learn, and face_recognition. As the time to market is key, we decided to set up the main pipelines for training (and improving), performing real-time recognition, and updating the database which is going to be described in detail below.

The following description of the models that have been used/implemented for the purpose of this proof of concept and cover the methods used for the realization and the proposed improvements for each of them.

The general naïve model for the product is represented below. It consists of different stages that  involve data acquisition, storage, communication, prediction using computer vision and user  notification via app.

The stages that were the main concern at the stage of the demo development are the ones that  involve computer vision (face recognition, face embedding and live recognition)

The current model for performing face detection is based on Facenet [1] and is briefly described  below.

FaceNet uses a deep convolutional network, based on the structure of Zeiler&Fergus [2] with 1×1  convolutions, such as below that requires 1.6GFlops per image. 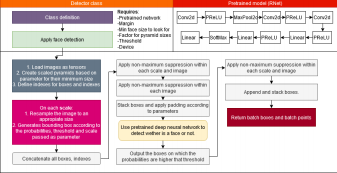 The performance of the model for the purpose of this project should be evaluated according to the number of faces that can be detected in a stream and that are without doubt faces, and the faces that the algorithm detects. The perfect algorithm should recognize all the possible faces that can be in a stream without making mistakes. Yet, the labeling of the total possible faces would be an extensive and tedious task. For this proof of concept, we considered a good performance when choosing the minimum threshold that allows to not have false positives. The recognition considerations are described below.

The current model implementation isn’t optimal and there are some specific considerations to be considered for the purpose of this project.

FaceNet uses a deep convolutional network as described above for performing face detection and verification. The application of this project requires recognition and clustering (or classification). The  embeddings are intended to be created using a Deep neural network that is trained by learning how  to encode a huge amount of faces of different IDs and learns how to represent them in a multi

dimensional vector space. An appropriate and mainstream for training the encoding of faces is based on the triplet loss which enforces a margin between each pair of faces from one person to all other faces.

These embeddings or encodings live in a manifold that enforces distance and discriminability of identities of the faces. For the purpose of fast classification of faces in the Livestream, a k nearest neighbors model is trained to cluster and predict labels of the encoded faces found on each frame.

Even though facet is a good starting point for performing the face recognition to the extent of this demonstration, there exist other alternatives to be considered such as SphereFace [3], CentreFace[4],  DeepID2 [5] and VggFace [6], that can be considered to be used in order to benchmark and obtain an optimal solution. Also, it can be a good option to consider, to design a surveillance-specific-purpose model. 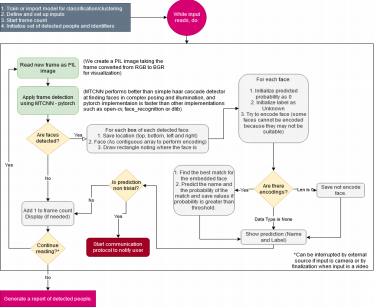 For the live stream, it is extremely necessary to define the IoT devices that are going to be used in the edge nodes and the computing capacity. The principal ideas to be considered are the use of multithreading or multiprocessing coupled with a more efficient C++  implementation that doesn’t make use of unnecessary libraries that load without need. Also,  the coupling with the communication systems needs to be defined in order to define the capabilities of the system. 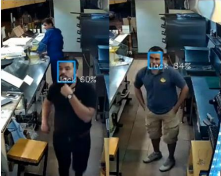 After performing identification, the system stores relevant data, such as the faces (in order to send a notification to the user) and IDs. It also generates a report of the predicted faces for the time it ran when the program is stopped or by request.

Figure 7. Predicted labels as files. Not embedded folder stores the faces that are not good enough to be embedded.

Figure 8. Unknown faces duplicates. So far, there is no way to save only unique faces, there is a good improvement opportunity to implement a system that recognizes unique faces per lapse of time (or event).

The algorithm still performs on crowded images. Yet, is not optimal to work on frames that contain more than 10 faces because the lag of the stream reproduction is not yet constrained for those conditions. It needs improvement.

A brief and preliminary description of the what the product is intended to be was presented,  along with a description of what has been used and some considerations for improving it.